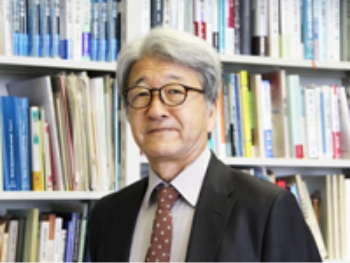 Director of the Kyoto Museum for World Peace,
Ritsumeikan University

The Kyoto Museum for World Peace, Ritsumeikan University is a museum that adequately instills the twin philosophical principles of “peace and democracy” in a university setting. Not only was it created to contribute to the education and research of the university, but also to serve as a space open to the public, as it tells the details of how civil society came together. Furthermore, it is not only limited to the local community and domestic society, but also has a global reach and cooperates with likeminded museums around the world. This peace museum is unique in that it originated at a university and promotes the idea that peace is not just the absence of military conflict but also the absence of structural violence.

After being greeted by the Anne Frank and Aikichi and Suzu rose bushes at the entrance to the museum, the permanent exhibition begins by going down the staircase next to the Wadatsumi-zo, a sculpture depicting the anger, grief, and pain of the students who were conscripted into the armed forces in 1943. After going through the exhibits on “The 15 Year War” and “Contemporary War”, the exhibition continues on the second floor with the theme of “Building Peace”. This exhibit shows that peace is not simply the lack of military violence. This exhibit also includes “The Studio of Life”: Kyoto Annex to the Mugonkan and the Peace Art Gallery. Even after viewing 650 artefacts and 550 pictures, you will still be overwhelmed by descending the stairs to the first floor and viewing the reliefs of Osamu Tezuka’s “Firebird” and the “Mutchan Peace Sculpture” in front of the Nakano Memorial Hall. By peacefully resting here for a while, we can think about not only “where peace comes from” or “what we can give”, but also “what we can create through our own effort”. Furthermore, special projects such as photo exhibitions, film screenings, and lectures are held in the Nakano Memorial Hall. Across from the hall is the Media Library for International Peace which holds around 47,000 books, magazines, and AV materials related to peace, as well as 1000 children’s books, which are offered for guests to use.

2019 will mark 100 years since the Treaty of Versailles concluded the First World War but, as the Preamble to the Charter of the ILO (established at the same time as the League of Nations) reminds us, “universal and lasting peace can be established only if it is based upon social justice”. The Preamble to the UNESCO Constitution states, “That since wars begin in the minds of men, it is in the minds of men that the defenses of peace must be constructed”. Peace is not merely the absence of armed conflict. The seminars and other events organized by this museum are organized with this idea in mind.

This museum uses the foreign loan word “museum” rather than the Japanese word “hakubutsukan”. The etymology of the word “museum” comes from the nine Muses of Greek mythology who were responsible for literature, art, and science. Utilizing the advantages of Ritsumeikan University, this museum strives to appeal to visitors through exhibits built upon the foundation of academic knowledge which have a strong visual appeal that leaves a lasting impression. Visitors will also experience their own journey towards peace which can become a reality through individual action. Please come and enjoy the wonderful exhibits we have here at the museum. We look forward to your visit. (June, 2018)

The twentieth century saw two world wars, in which tens of millions of lives were lost. Nonetheless, conflicts have not stopped, and many lives are still in danger today.

We need to eliminate not only the causes of conflict, but also all barriers to human development so that we can build a peaceful society in which human potential can blossom.

As a university, Ritsumeikan felt that it had a social responsibility to promote the development of a peaceful society, and therefore established the Kyoto Museum for World Peace to foster the understanding necessary to build a peaceful world.